Tax reform will impact risk tolerance and asset allocation for insurance company portfolios. How will tax-preferenced securities factor in for you?

Show More
Jim is an Executive Enterprise Capital Return & Risk Management Advisor at NEAM, Inc. He joined the Firm in 1997. Prior to joining the Firm, he was Chairman and CEO of AEGIS Insurance Services. Prior to Aegis, Jim served as President and CEO of the New Hampshire Group, a division of AIG. He began his insurance career at E.W. Payne, broker at Lloyds followed by The St. Paul Companies as a Financial Analyst, with his last position as President of the Commercial Insurance Division. Jim has served as a Director of Tempest Re, Inter-Ocean Re, Insurance Services Office, Inc. (ISO), National Council of Compensation Insurers (NCCI) and Trustee of Macalester College, and as a founding Director of Actors Theater of St. Paul, an Equity Theater. Jim holds a Bachelor of Arts from Macalester College, an MBA from The Wharton School and a PhD from the University of Pennsylvania where he was a Huebner Foundation Fellow. He has been employed in the insurance or investment industry since 1969.

Accounting for the Impact of Taxes on Estimated VaR

The Impact of Enacted Tax Changes on Asset Allocation

Recently, we explored how tax changes have influenced the attractiveness of tax-preferenced investments and the impact of accounting regimes and taxes on rating agency and regulatory solvency assessments.1 This Perspectives addresses the impact of these tax changes on risk tolerances and asset allocation when taxes are explicitly considered in the decision process.

To summarize our findings:

This issue of Perspectives is divided into four sections. The first reviews the basic enterprise framework for insurer return on equity and risk based on formulation using industry-wide results. The second shows the impact of alternative approaches to accounting for taxes in downside risk estimates. In the third section, we discuss how the recently enacted tax law impacts asset allocation. We conclude with key takeaways and an expanded summary of findings.

Earnings risk is the combined leveraged volatility of the underwriting and investment returns, plus any correlation effects. The industry’s estimated pre-tax return on capital and earnings risk are 10.9% and 12.5%, respectively. The 99.5% VaR is 25.8% of capital within the next year.3

Accounting For the Impact of Taxes on Estimated VaR

Most U.S. domiciled insurance companies are subject to U.S. Federal income taxes. As shown in the first two columns of Table 2, taxes reduce expected rates of return, their volatility and VaR estimates. The extent of the impact depends on the type of earnings (ordinary income, preferenced items, and capital gains and losses) and pre-tax VaR estimates.4 Occasionally, practitioners tax affect the returns but not earnings risk, in which case the estimated VaR is greater than the pre-tax amount. This is shown in column three (mixed rates).5

Table 3 shows pre-tax and after-tax statistics using historic 35% and newly enacted 21% tax rates. Columns one and two are identical to what was shown in Table 2 above. As taxes decrease, returns and volatility increase – leading to higher estimates of VaR, and potentially counter-intuitive results.

There are two takeaways from Table 3:

The Impact of Enacted Tax Changes on Asset Allocation

Table 4 shows after-tax total return and risk statistics for municipal and broad market securities. As tax rates fall, the relative value of municipal returns declines from 85 bps (4.88 – 4.03) to 5 bps (4.94 - 4.89). However, municipal’s volatility becomes relatively more favorable at 81 bps (3.84 – 3.03) versus 58 bps (3.16 – 2.58). The estimated VaR increases for both security types as rates decline. But, municipals have a superior “net-net” outcome, resulting in a less dominant after-tax return and an increasingly favorable risk profile as tax rates fall.

Table 5 highlights results of the industry’s portfolio holdings reallocation in response to the recently enacted tax law. The focus is on changes in the “optimal” municipal bond allocation. Column one shows current holdings’ enterprise statistics and broad sector allocation at the prior 35% tax rate. Column two displays the corresponding optimal similar VaR portfolio achieving an expected after-tax return of 8.67%. This is driven by an increase in (longer dated) municipals and a lessening of overall credit quality. In the new 21% tax rate environment, the similar VaR portfolio is achieved with a similar duration extension, an unchanged credit quality and a lesser municipal bond allocation increase. 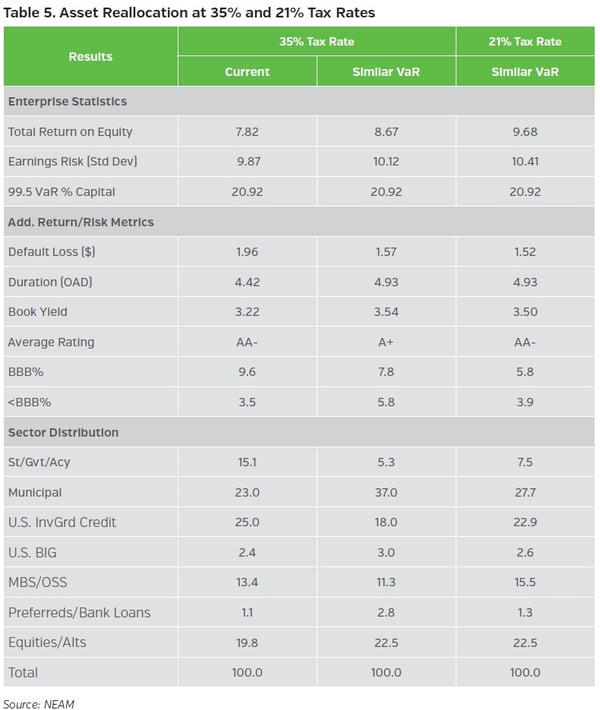 Prior to the enacted tax law changes, many individual companies were likely to have been significantly underweight in tax-preferenced securities. Thus, the industry portfolio reallocation above identifies a large municipal increase in column two.7 With lower tax rates, the potentially overwhelming advantage for municipals diminishes, requiring a far lesser increase to achieve an optimal allocation within estimated enterprise risk levels.

The results in Table 5 are based on industry holdings at year-end 2016 and capital market opportunities in 2017. Individual company results will vary depending upon their current tax-exempt and taxable embedded yield term structures and future capital market opportunities which meet their market risk tolerances. These will evolve with time. As they do, the relative attractiveness of current holdings to tax-preferenced securities available in the capital markets will change…as they have done during all prior tax regimes. It might be “in with the new,” but for astute practitioners it definitely is not “out with the old”…at least not yet.

For more information on this topic or past discussions on the impact of tax changes, please contact us.

2 Conceptually, this formulation applies regardless of the measurement regime. The components may be estimated differently, depending on how the estimated VaR is intended to be used.
3 As losses occur throughout the year, it is more likely that their total sum accumulates to the VaR threshold at any time during the year than precisely at the end.
4 The percent reductions in total return and earnings risk are not identical nor equal to 35%. This is because of the impact of proration rules on income components of total return and the difference in the relative price volatility of preferenced versus non-preferenced items.
5 The discussion of taxes in VaR calculations is rare and we have observed a variety of mixes and matches of tax treatment. Calculations are laborious and errors may be the result of oversight or inability to account for diverse tax rules.
6 The returns shown are total returns. The tax rate for tax-exempt bond coupon income is unchanged at 5.25%. The tax rate for price changes of both taxable and tax-preferenced securities declines from 35% to 21%. The later causes the increase in the after-tax total return of municipal securities.
7 This comment is based on many years of compiling peer reviews.