The Red Dragon Looks a Little Out of Breath

The trade impasse with the U.S. appears to be throwing more cold water on China’s economy.  The longer it goes on, the higher the stakes.

As we approach autumn in the Northern Hemisphere, the trade standoff between the U.S. and China drags on with no immediate resolution in sight. As tariffs take hold, we are reminded that the negotiation process is complex and that there are decades of history to overcome.  At present, the U.S. has imposed tariffs on roughly $250 billion of Chinese imports and has announced it will impose a 10% tariff on a portion of the remainder ($300 -$325 billion), going into effect on either September 1 or December 15, 2019. The Chinese have reciprocated with tariffs on all the goods they import from the U.S., roughly $110 billion. While we are currently proceeding under the yellow flag, the Trade War seems far from over and trade uncertainty has taken a toll on economic growth. Since the U.S. economy (for better or worse) is largely driven by consumption (~70% of GDP) and because service industries dominate our economy (~85%), we are in a relatively better position vis-à-vis those countries which rely on manufacturing and exporting.

China has been encouraging domestic consumption for years in an effort to diversify its economy away from manufacturing. That said, exports are still a main driver of its economy and stress fractures have been developing as of late. Second quarter year-over-year GDP growth in China was +6.2%, the weakest in decades. For those in advanced economies, the angst over slowing to +6% GDP growth rings a bit hollow but for China, managing the rate of deceleration in the economy is important.

Interestingly, despite significant stimulus measures implemented by the People’s Bank of China (PBoC), including both fiscal stimulus and easier monetary policy, rates on loans have not adjusted lower (see Chart 1). Policy makers have surmised that China’s complex array of interest rates is partly to blame. The PBoC has been cautious about cutting the benchmark one-year rate for fear of weakening the yuan and fueling asset inflation. Instead, the central bank has pumped cheap liquidity into the banking system while also reducing reserve requirements. Hence, three-month SHIBOR (Shanghai Interbank Offered Rate) has dropped from 3.35% at the end of 2018 to around 2.60% currently. While this demonstrates ample liquidity in the financial system, it hasn’t translated to lower rates on loans to businesses and consumers. The PBoC will more than likely make some changes to its interest rate mechanisms to ensure better absorption of the easier policy. It is telling though, that “impediments” in the credit channel weren’t an issue when China was growing in the double digits.

The question that many are asking is whether China’s slowing growth is the result of trade tariffs and disruption of the status quo by the U.S. or whether some other forces are at play. It would be difficult to argue that China’s slowdown isn’t at least partially related to U.S. tariffs imposed on Chinese goods. Several dozen global companies have announced that they are considering or have already decided to move production and supply chains out of China. These companies include Apple, Dell, Hewlett Packard, Toshiba Machinery, Sumitomo Heavy industries, Nintendo and many others. The longer the trade dispute drags on, the longer this list will grow.

In reviewing trade figures, both Chinese imports and exports have tailed off recently. Somewhat softer exports may be attributable to a slowing global economy and these don’t necessarily imply U.S. tariffs are roiling the Chinese export machine. In fact, recent export data appear relatively stable but as the companies noted above, along with others, shift production to non-tariff countries, those figures will likely suffer (see Chart 2). Imports, on the other hand, have dropped significantly. This is noteworthy because imports provide some insights into the health and confidence of the Chinese consumer (see Chart 3).

Despite the fact that China’s media has stirred a sense of nationalist pride in fending off the U.S., it seems likely that the drop off in imports hasn’t been driven by substitution of Chinese goods but rather by a more cautious Chinese consumer. While year-over-year retail sales growth in China continues to track in the high single digits, this metric which is volatile month-to-month, has slowed appreciably in the last 18 months (see Chart 4). 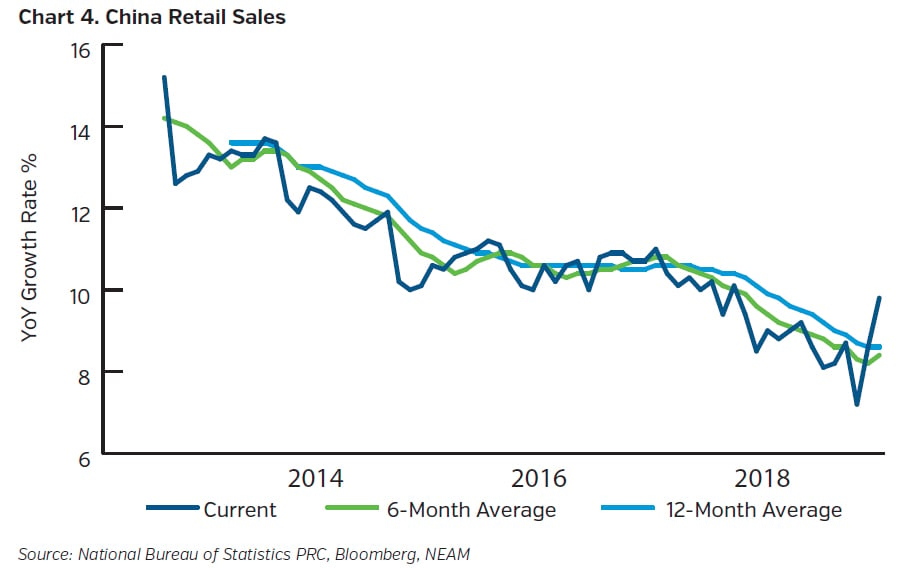 Perhaps not coincidentally, a nationwide Chinese employment survey (akin to the U.S. household survey and not directly influenced by Beijing) shows some upward drift in the unemployment rate (see Chart 5). Without question, Beijing is keenly interested in making sure the employment picture stays on solid footing. That said, the fact that the Chinese job market may be softening is contributing to the mosaic of a country that is slowing more than President Xi would like or that many of us appreciate. 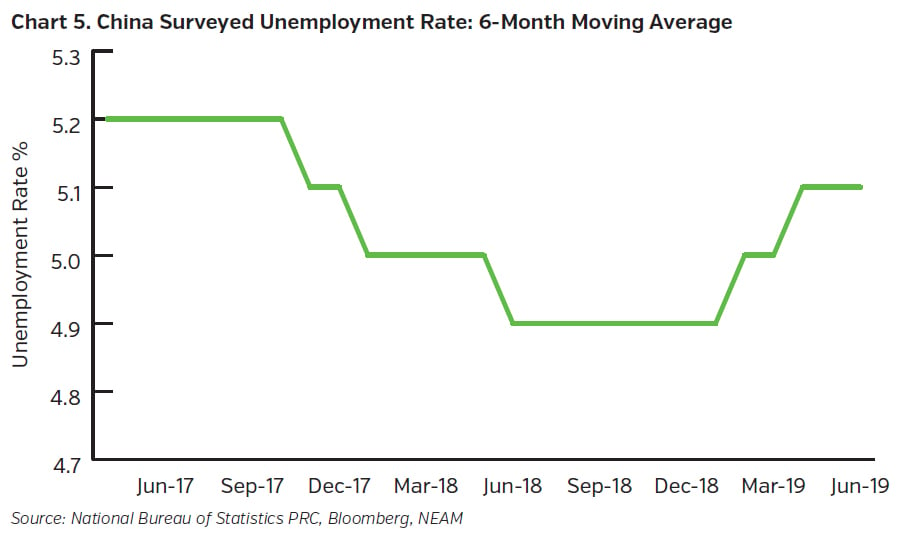