After the contentious 2020 presidential election and its aftermath, the loss of both Republican Senate seats in Georgia proved a surprise. Just a few weeks earlier, the assumption was that Congress would be divided and that any sweeping legislative changes were unlikely. That presumption changed with the Republican loss of those two seats. President Biden has indicated that he would like to re-establish a bi-partisan legislative process. While we hope he is successful, bipartisan cooperation would be a tall order at this moment.

The U.S. has spent trillions of dollars on COVID relief packages to date and the recently passed next round of stimulus will add $1.9 trillion to the tab. As far as the possible implications of post-pandemic policy, the main worry appears to be a resurgence of inflationary pressure brought about by the extraordinary (and still growing) amount of monetary and fiscal stimulus. The U.S. budget deficit ballooned to $3.1 trillion for 2020 and this year’s budget deficit was expected to exceed $2 trillion even before the next round of stimulus (see Chart 1). An unexpected pick up in inflation is certainly a risk but markets have already factored in a significant rise from pandemic-depressed levels. The Treasury market has now priced in inflation expectations of over 2.00% for the next 10 years, using 10-year inflation break-evens as a proxy (see Chart 2). 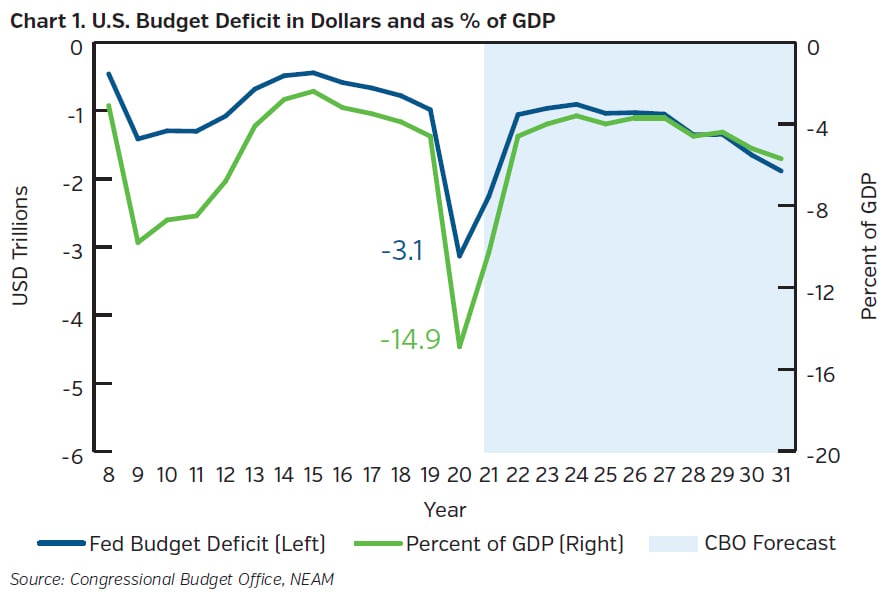 The long-term inflationary pressure that people worry about, however, is not “around the corner” and would likely require some structural and/or policy changes in the U.S. economy for it to actually take hold. After all, we’ve had over a decade of easy money, a torrent of quantitative easing and an unemployment rate as low as 3.5%, yet consumer price inflation has not been an issue. Inflation is a long cycle phenomenon though and below are just a few trends and policies that, when combined with existing monetary and fiscal policy, could tip the scale towards consistently higher price levels.

This item of course would be on EVERYBODY’s agenda, regardless of party.

Until we approach something closer to full employment, sustained consumer price pressure is unlikely. The U.S. economy is down roughly 10 million jobs since the start of the pandemic and these jobs would need to be recouped as a pre-requisite to sustained inflation pressure.

The pandemic has laid bare the fact that globalization of supply chains, while perhaps optimal for profit maximization, also leaves companies and countries vulnerable when there are supply shocks. A great number of multinational companies have brought some portion of their operations back to the U.S. If the trend continues and becomes engrained, the likelihood of bringing good paying, skilled middle class jobs back to the U.S. would increase, broadening our economic base and increasing sustainable end demand.

This is a thorny issue for obvious reasons. What was once considered “moral hazard” seems to have become accepted as a means of dealing with crises. While widespread debt forgiveness is virtually out of the question, President Biden has advocated for $10K of student debt forgiveness. Other Democrats have advocated for much more. With $1.7 trillion of outstanding student loan debt, a reduction of any magnitude could shift supply and demand dynamics.

Central banks continue holding rates at zero (or negative) which favors borrowing and spending vs. saving. While inflation expectations of 2%+ are priced in, a return to more “normal” real rates is not. An increase in real rates needn’t lead to a financial calamity but it will create headwinds for markets. Hence, a return to a more “normal” landscape will be difficult to accomplish without reversing (at least temporarily) some of the outsized gains in financial assets over the last few years.