“Nuking” Our Way to Lower Emissions 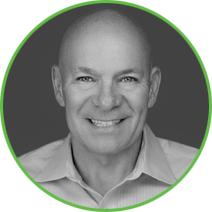 Show More
Andy is a Senior Research Analyst in the Corporate Bond Group at NEAM, Inc. and is responsible for the credit research and recommendations pertaining to several sectors within the investment grade corporate market. He joined the Firm in 2016 having previously been a Director in the Portfolio Management Group at Conning Asset Management and a Senior Analyst at Genworth. Andy is a graduate of Union College, holds an MBA from Columbia University, is a CFA Charterholder and is a member of the Hartford Society of Financial Analysts. He has been employed in the investment industry since 1993.

Nuclear Power in the U.S.

Nuclear Power in the U.S.

Green sources of electric power such as wind and solar are appealing as they emit minimal pollution and carbon while producing power. The wind does not blow constantly, however, nor is the sun out around the clock and electric storage technology has not advanced to the point of capturing energy from any source sufficient to power an entire electrical grid. Other forms of energy that run almost continuously – such as nuclear power1 – are required to fill any gaps in production of electricity from the wind or the sun.

What is the state of nuclear electricity generation in the U.S.? Unfortunately, after a strong pace of nuclear power plant construction in the 1970s – 1990s2, the country lost enthusiasm for building new facilities. Construction was expensive, approvals increasingly difficult to obtain and publicity surrounding the relatively few nuclear facility accidents discouraged development.3 The nuclear share of electricity generation in the U.S. rose from 2% in 1971 to around 20% in 1991, where it has remained. In comparison, wind’s share is 9% and solar’s is 3%.4

Nuclear accidents have disproportionately raised public concern compared to the actual record. When judged by fatalities per unit of energy produced, nuclear is superior to coal, oil, natural gas and even biomass. Measured by emissions, nuclear power is comparable to hydropower, wind and solar.5 Furthermore, safety has improved with advances in fuel technology, thermal efficiency, more rugged design, and enhanced systems.6

When pursuing net zero emissions, nuclear power lowers the overall cost of electricity, capital and space required to construct backup power and transmission facilities.7 Considering expenses over the life of energy investments, nuclear power plants are more economical because they operate more than twice as often as solar or wind power (93% of the time vs. 25% for solar and 35% for wind8) and last twice as long. Plants are fueled by relatively cheap and plentiful uranium with large reserves in Australia, Canada and Mongolia.9 A comparison of international energy projects shows wind and solar electricity at roughly three times the all-in cost of nuclear.10 Lastly, emissions fall when nuclear plants replace fossil fuel for electricity. France experienced a greenhouse gas decline of 2% per year as it moved to nuclear from fossil fuels in the 1970s and 1980s11 and the International Energy Agency estimates that net zero emissions by 2050 will need global nuclear power capacity to double to 812 gigawatts from today.12 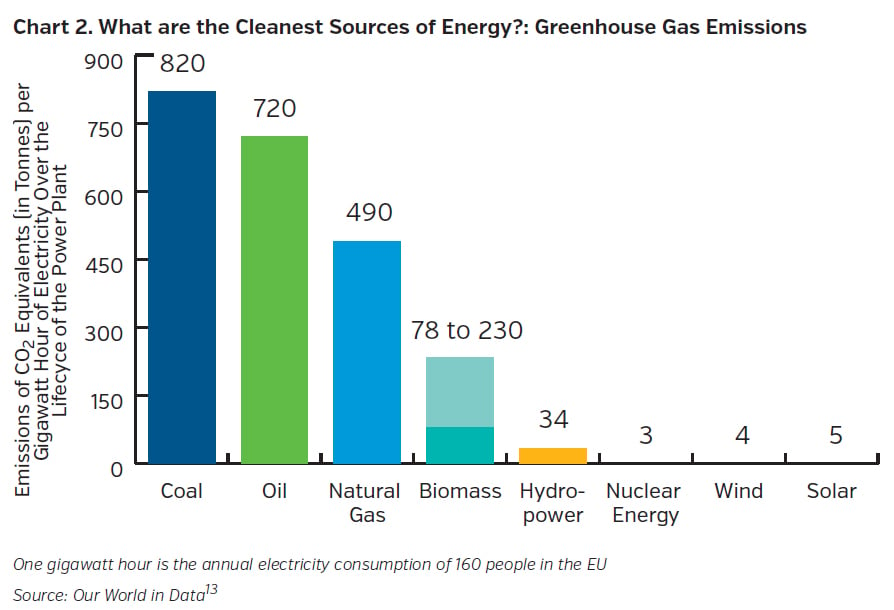 To remain competitive and increase energy independence, the U.S. needs to keep pace with both rivals and allies who are expanding their use of nuclear. Globally, 55 reactors are under construction, including 19 in China, 7 in India and 3 in Russia – all scheduled to be online by 2027.14 Following recent energy price disruptions, the European Union has included nuclear as an “Environmentally Sustainable Investment,”15 with several countries reversing policies phasing out nuclear energy in favor of extending plants’ lifespans and developing new plants, including France,16 Germany17 and the UK.18 In the U.S., licenses have been granted for eight new reactors, though only two are under construction.19 There is promise ahead for the U.S. with federal20 and state21 level directives to extend existing plant lives and refocusing on nuclear power. Advances in reactor design, fuels, and size of facilities provide the opportunity for nuclear energy to improve efficiency, safety and increase electric generation capacity over the coming decades.