Light at the End of the Tunnel for European Banks?

Despite many historic challenges as well as COVID-19, could the outlook for European Banks, an important asset class for insurers' portfolios, be turning positive? 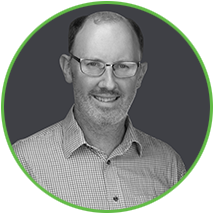 Show More
Fergus is a Senior Research Analyst at NEAM Limited and is responsible for investment grade European corporate credits. He joined the firm in 2019 having worked at the Bank of Ireland in a variety of roles including nine years in leveraged acquisition finance and two years in corporate credit. Fergus holds a Bachelor of Business and Legal Studies from University College Dublin and a Postgraduate Certificate in Managing and Leading People from Coventry University. He has been employed in the investment industry since 2002.

European banks have been one of the weakest performing sectors of the equity market over recent years. We look at the sector from a credit perspective and show how a potentially stronger European Union (EU) post COVID-19, with greater levels of European fiscal integration, could positively impact this important asset class. 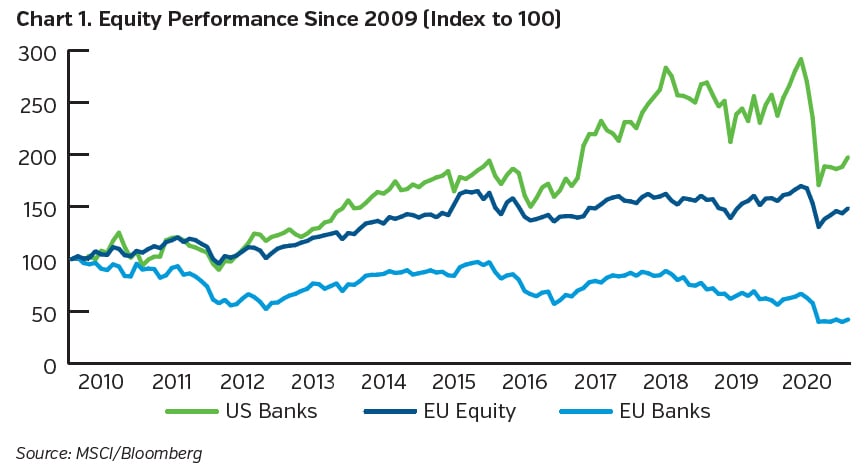 European banks are by far the largest sector within the € investment grade bond market, accounting for almost 40% of total outstanding debt (market value US $3.3 trillion). Indeed, European banks have materially underperformed their US counterparts from an equity perspective since the Great Financial Crisis (GFC) of 2008 to 2009, as shown in Chart 1 above.

2020 has been endemic of some of the challenges facing European banks, with earnings missing consensus as reserves rose sharply, although offset to a degree by increased trading profitability due to market volatility. The Oliver Wyman Group (part of Marsh McLennan & Co.) has forecast that European banks will face credit losses of approximately €400bn from 2020 to 2022, which is 2.5x the level of total reserves made over the previous three years. This would be roughly 40% of credit losses experienced during the GFC; however, a second lockdown would push credit losses close to those seen during the GFC.

So what does this tell us about the current underlying credit quality of the European banking sector as we emerge from a recession deeper than any in history?

Post the GFC, European banks, particularly in the periphery had to manage outsized Non-Performing Loans (NPL). These remained stubbornly high as post-recovery GDP growth in Europe was modest, with NPL levels only starting to reduce materially in the latter half of the 2010’s. As a comparison, US NPL’s have traditionally been lower than European levels (see Chart 2 below).

Low and negative interest rates, subdued loan growth, along with the European sovereign debt crisis, have all weighed on profitability and sentiment in the European banking sector versus their US counterparts. 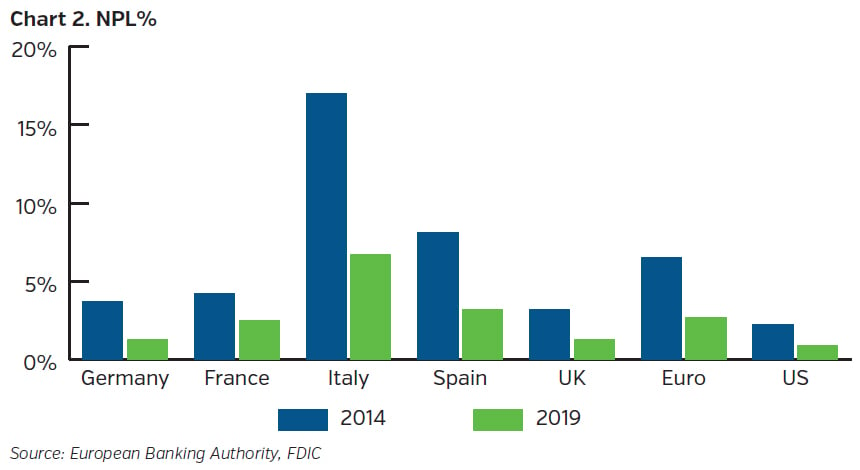 To ascertain the health of European banks in terms of the current crisis, we examine European bank capital, funding and loan provisioning, and compare it to the sector’s position pre-GFC.

Capital - Bank’s capital positions are now in a stronger position given numerous regulatory responses post-GFC, including the Capital Requirements Directive (CRD4), which was introduced in 2013 for capital, liquidity and resolution (see Chart 3 below). This, along with several other regulatory changes, has left European banks better capitalized, more liquid and less reliant on short-term wholesale funding.

More recently, given the “elevated” starting capital levels, there have been several moves from the European Central Bank (ECB) to ease capital requirements in order to offset some of the inevitable negative impacts of increased risk provisions or losses due to COVID-19. These include:

These moves should be offset to a degree by the ECB’s decision to prohibit dividends and shareholder buybacks until January 2021 in order to bolster capital levels, noting the Top 20 European banks paid out €45bn to shareholders in 2019.

Funding – Introduction of various bank funding and subsidy schemes including the Pandemic Emergency Longer Term Refinancing Operations (PELTRO) scheme (ECB pays banks 25bps to receive unlimited credit from the ECB with repayment due in Q3 2021). This demonstrates that ECB funding support has been constant and extensive. Indeed, banks have been increasingly accessing cheaper ECB funding rather than the primary € investment grade bond market (-5% issuance YTD vs. +60% for non-financials) providing a positive technical backdrop for this asset class, noting it does not benefit from the various ECB bond buying programs.

Loan Provisioning – International Financial Reporting Standard 9 (IFRS 9) (impacting accounting for problem loans) was due to be introduced in 2020 or 2021. However, numerous amendments have been made to protect bank capital ratios, including extending current transitional arrangements by two years and allowing add-backs to regulatory capital in the interim period.

The ECB and European Commission response to COVID-19 from a fiscal and monetary perspective has been timely and sizeable, calming markets and avoiding any “blow-out” in periphery sovereign credit spreads. As an example, the Germany and Italy 10-year spread now stands at 149 bps vs. 266 bps in mid-March.

This has been underpinned by proposed greater levels of fiscal integration as part of the Macron-Merkel plan, which was agreed to by the European Council on 21 July 2020 (subject to further ratification by each member state and the European Parliament). This plan provides €390bn in grants and €360bn in loans. This agreement effectively mutualizes part of the cost of the COVID-19 response at the EU level, and introduces some fiscal risk sharing and central debt issuance, with the EU exiting the COVID-19 pandemic on a stronger and more cohesive footing.

The value of M&A among European banks is at historic lows. This has been recognized by the ECB, who recently stated that “well-designed and well-executed consolidation can … address overcapacity and low profitability.” As a result, the ECB has begun a public consultation (to end October 2020) on its supervisory approach to European bank consolidation. They have outlined a potential range of guidelines which should aid consolidation. The end result would be a banking system that is more cost efficient and more profitable, while at the same time diversifying business models and deepening the banking union (see Chart 4 for scale of EU banks vs. US). 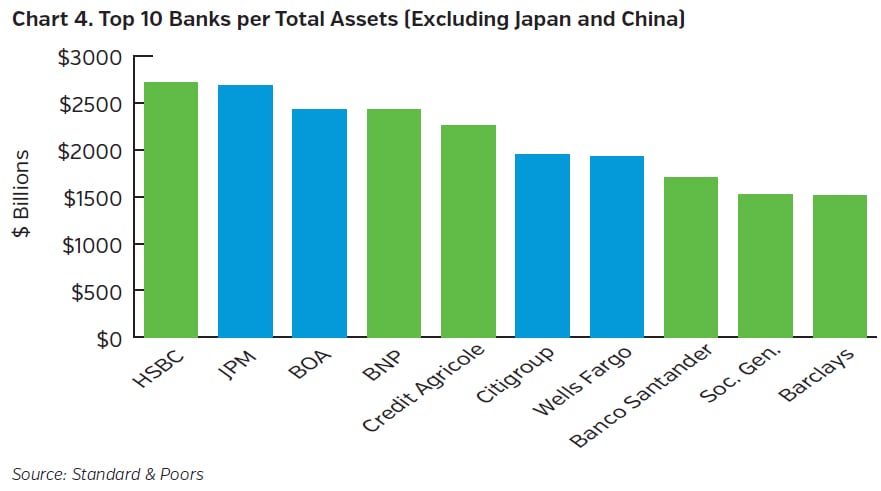