Libor is phasing out and may cease to exist past 2021. There has been a lot of progress made to date in the transition away from Libor. Where are we in the process and what are the implications for market participants?

Show More
Emre is an Asset Class Specialist at NEAM, Inc. and is responsible for trading the Firm’s equity, treasury, agency and short-term portfolio. He joined the Firm in 1997. Emre is a graduate of the University of Istanbul, Turkey, with a Bachelor's degree in Business Administration and an MBA in Finance from the University of Hartford. He has been employed in the investment industry since 1997.

contracts and fallback arrangements for derivatives and cash products

In late 2014, the Federal Reserve assembled the Alternative Reference Rates Committee (ARRC) and assigned it the task of identifying a new proxy for U.S. Dollar London Inter-bank Offered Rate (Libor) and devising a transition plan to the chosen rate.

After extensive research and discussion, on June 22, 2017, the ARRC announced that it selected the Secured Overnight Financing Rate (SOFR) as its recommended replacement for Libor. The transition from Libor to SOFR will have profound implications for institutional investors, insurance companies, borrowers and other market participants.

SOFR, formerly known as Broad Treasury Financing Rate (BTFR), is a reference rate based on overnight repurchase agreement (repo) transactions, which are collateralized by U.S. Treasuries. Given the U.S. Treasury backing, SOFR is considered to be essentially risk-free. 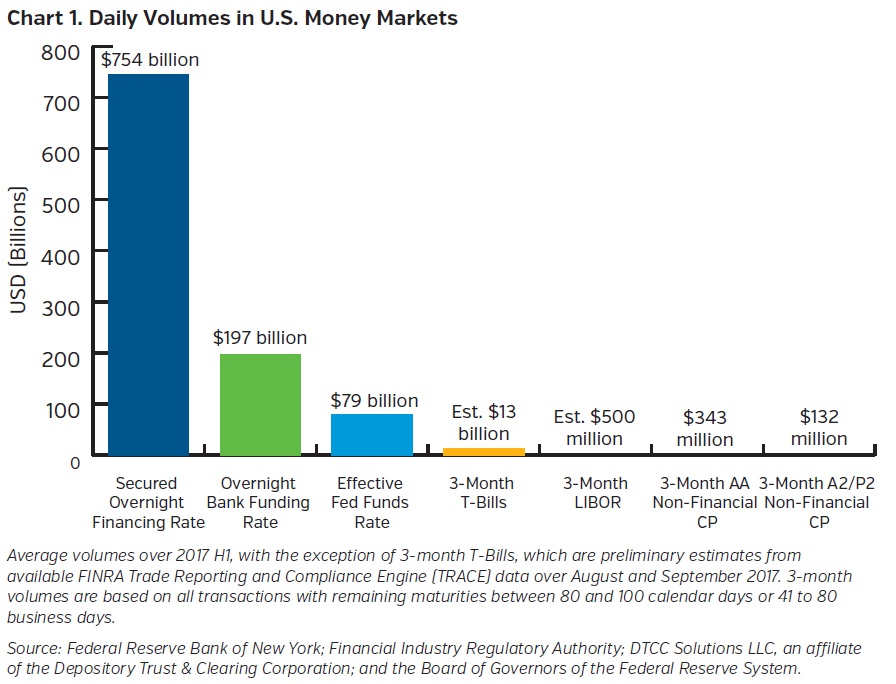 The publication of daily SOFR marks the first step in the transition away from Libor.

The outstanding value of transactions which reference U.S. Dollar Libor is estimated to be roughly $200 trillion. Approximately 95% of outstanding transactions involve derivatives contracts. The remaining 5%, or ~$10 trillion, is in cash products such as business loans, collateralized loan obligations, mortgages and other consumer loans, corporate floating rate notes and other securitizations.

In the derivatives market, there is already familiarity with the contracts that reference overnight rates (e.g. Overnight Indexed Swap and futures contracts referencing the Effective Federal Funds Rate) among the market participants, hence SOFR can be incorporated into new contracts relatively easy. However, adaption of SOFR in cash products is much more challenging since SOFR is a backward looking, overnight rate and cash products generally require a forward looking term rate (e.g. 1-month or 3-month Libor).

To tackle this issue, the ARRC published a roadmap called the Paced Transition Plan. ARRC’s main goals are to facilitate trading and to progressively build liquidity in the SOFR-linked futures and swaps markets. They have discussed several potential methods for creating a SOFR term structure and concluded that a futures-based method is best suited for this goal. This method will involve the creation of a synthetic constant-maturity term rate by computing implied rates between SOFR futures contracts. The ARRC estimates that this final step can be accomplished by the end of 2021, which is when Libor is expected to cease publication.

Notably, on February 20, 2018, the Financial Accounting Standards Board (FASB) issued a proposed Accounting Standards Update that would expand the list of U.S. benchmark interest rates permitted in the application of hedge accounting to include SOFR as the fifth admissible benchmark rate, in addition to Treasuries, Libor, OIS (based on the Fed Funds Effective Rate) and the SIFMA municipal swap rate.

Contracts and Fallback Arrangements for Derivatives and Cash Products

The International Swaps and Derivatives Association (ISDA) has been leading an initiative to address issues regarding the derivative contract language in new trades as well as legacy trades. ISDA’s current contract language for interest rate derivatives states that the counterparties are expected to seek quotes from banks in London or New York if Libor is not published. As long as two quotes are obtained, Libor is determined as the average of all the quotes. We feel that it is highly unlikely the banks will provide quotes necessary to complete the fallback process if they are unwilling to submit Libor rates in the first place. Recognizing this weakness, ISDA has been working to amend the inadequate fallback provisions in its documentation and decided that SOFR should be used as the appropriate primary fallback rate in the event Libor were to be permanently discontinued. ISDA concluded that a fixed spread needs to be added to SOFR in order to account for the bank credit risk captured by Libor but not by SOFR. ISDA has convened a working group to determine a methodology for calculating the spread. No final recommendations have yet been made by this group.

Transition issues for cash products are less straightforward than for derivatives products due to the fact that, unlike derivatives, cash products are not covered by standardized documentation. Many bilateral negotiations will need to be conducted to modify existing contract language. ARRC has formed four working groups to take on these challenges.