Kissing Cousins: What’s Ahead for Leveraged Loans and CLOs?

Recent trends in leveraged loans and CLOs have raised eyebrows. What’s in store for these closely related sectors and how should they be regarded in insurers’ portfolios?

Show More
Jennifer is Head of Structured Securities at NEAM, Inc. and a member of the Firm’s Policy Committee. She is responsible for all aspects of our structured securities effort, including the assessment of non-traditional asset backed security types. She joined the Firm in 2007 having previously been Head of Structured Research at Conning Asset Management and a Managing Director at Structured Finance Advisors. Jennifer holds a Bachelor of Arts in Economics and Finance from McGill University, has an MBA in Finance from New York University and is a CFA Charterholder. She has been employed in the investment industry since 1986.

Leveraged Loans and CLOs as a Percent of GDP

Observed trends in leveraged loans and their securitized counterpart (Collateralized Loan Obligation or “CLO”) have garnered the attention of the financial press, politicians and rating agencies. While leveraged loan terms and quality have weakened, references to a potential repeat of the Great Financial Crisis (GFC) exaggerate the risk of contagion to the broader financial markets and underestimate the protections afforded to investors in senior CLO debt tranches.

As we sit in the later stages of the economic cycle and market prognosticators try to anticipate the next culprit that will plunge the U.S. into recession, leveraged loans emerge as an easy target: 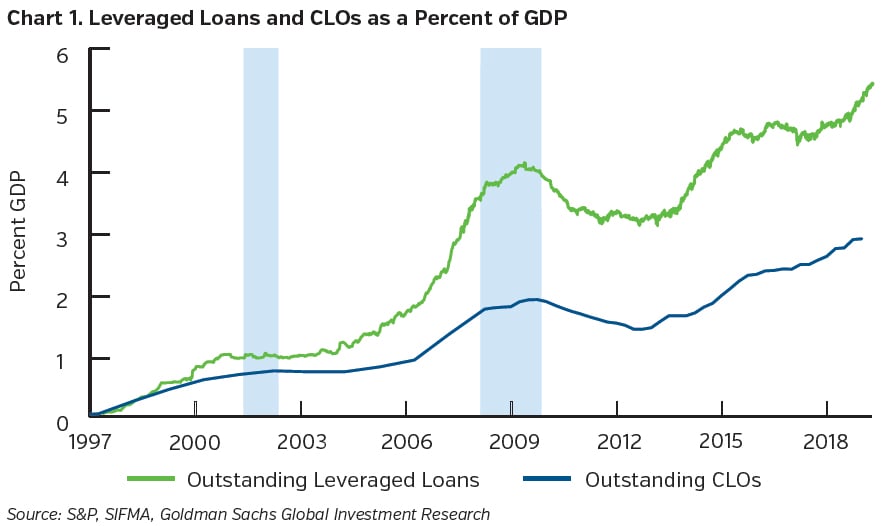 Taken together, these trends do not bode well for the next default cycle. A study by Standard & Poor’s concluded that cov-lite loans recovered an average of 72% versus 82% for non cov-lite loans for entities that emerged from bankruptcy between 2014 and 2017. Additionally, a future default cycle could be more protracted if these weaker covenants fail to bring borrowers promptly to the negotiating table.

CLOs, in their own right, comprise a large and growing market. We are reminded that complex, illiquid and highly-leveraged securitizations contributed to (or caused) the GFC. How should we view the prospect for CLOs in the context of a potential major market credit reversal? 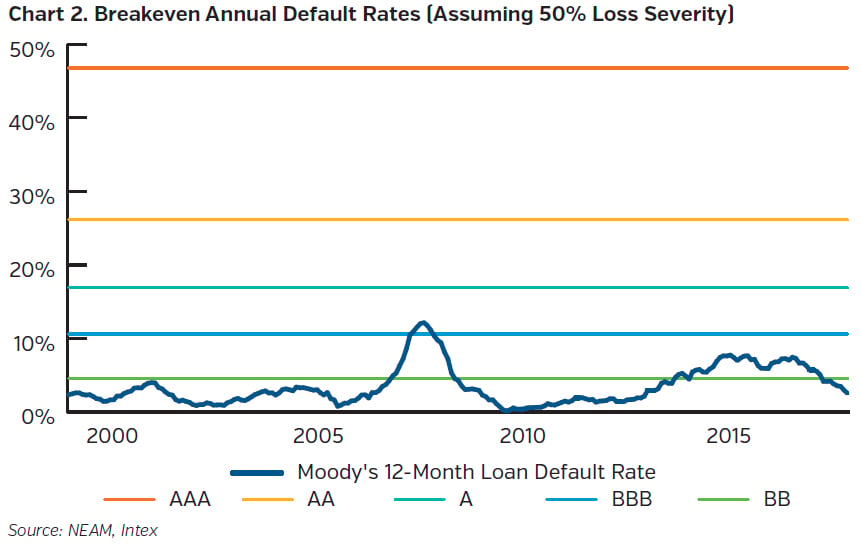 Total returns for both leveraged loans and CLOs have been impressive in 2018, driven by demand for floating-rate instruments in a rising rate environment (see index returns in Chart 3 below). Future returns will depend on the path of, and expectations for, interest rates, economic growth, inflation, and timing of the next recession. Those expectations can change quickly. Leveraged loan prices fell sharply during the month of December as the market perceived the Fed as shifting to a more dovish stance. Large loan fund outflows followed. In contrast, the more highly-rated portions of the CLO structure have been far less volatile than loans historically, though BBB rated CLO tranches have exhibited even higher volatility than leveraged loans. We should also bear in mind that, while CLOs are a short interest duration asset, they nonetheless have spread duration reaching 5+ years. 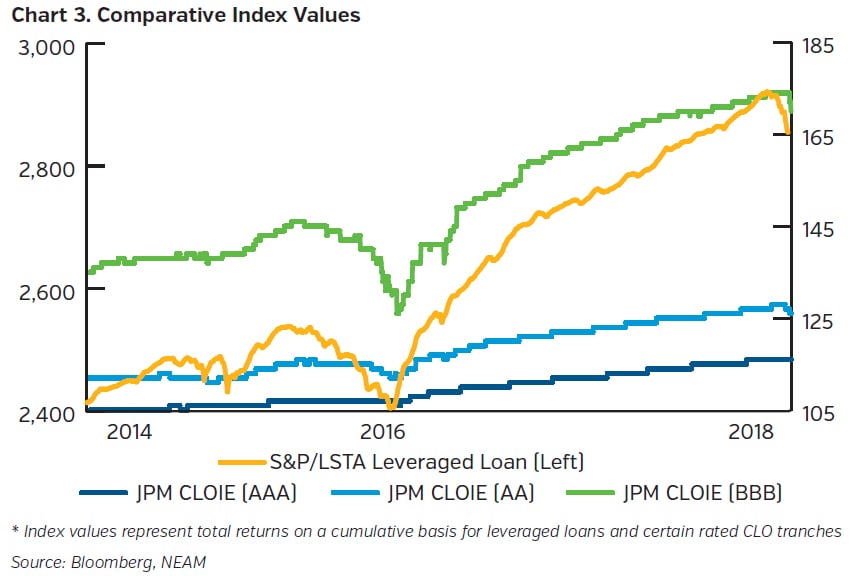