Is Low Inflation Here to Stay?

Inflation - The impact of global trade

The long-run rate of inflation in the U.S. is roughly 3%, yet we haven’t had sustained inflation readings in that range since the mid-1990s. There are many causes for this, not the least of which is the most significant economic downturn in several decades and perhaps since the Great Depression. Still, after nine years of exceptional and stunningly accommodative monetary policy, it’s a bit surprising that central banks are still working toward achieving a 2% inflation rate.

Inflation - The Impact of Global Trade

Of all the possible causes of low inflation (and there are many), one has recently captured the attention of investors all over the globe. The loosening of trade policies and tariffs over the last 25 years has generally kept downward pressure on prices. One need only consider a brief history of trade policy to rationalize this argument. In Chart 1 below, we note that the 1990s saw significant developments in efforts to liberalize tariffs and trade agreements in order to promote “freer trade.”  In 1994, the North American Free Trade Agreement (NAFTA) went into effect. This agreement broke down trade barriers between the U.S. and its two contiguous neighbors, Canada and Mexico. Politicians and economists were divided then, as now, on the costs and benefits of such an agreement. Ultimately though, the legislation passed through Congress with bipartisan approval, something that we rarely see today.

In 1995, the World Trade Organization (WTO) came into being as China was making its way on to the world stage. China ultimately was admitted to the WTO in 2001. Global trade prior to the emergence of the WTO was governed by the General Agreement on Tariffs and Trade (GATT). The new body adopted the general construct of GATT but also sought to expand standards and governance around free trade policies. From Chart 1, it is clear that increased globalization (among other things) has had a beneficial impact on prices, which has directly benefitted U.S. consumers (and those in advanced economies generally) by keeping a tight lid on inflation. This facet of globalization, at least on its face, is unambiguously good. 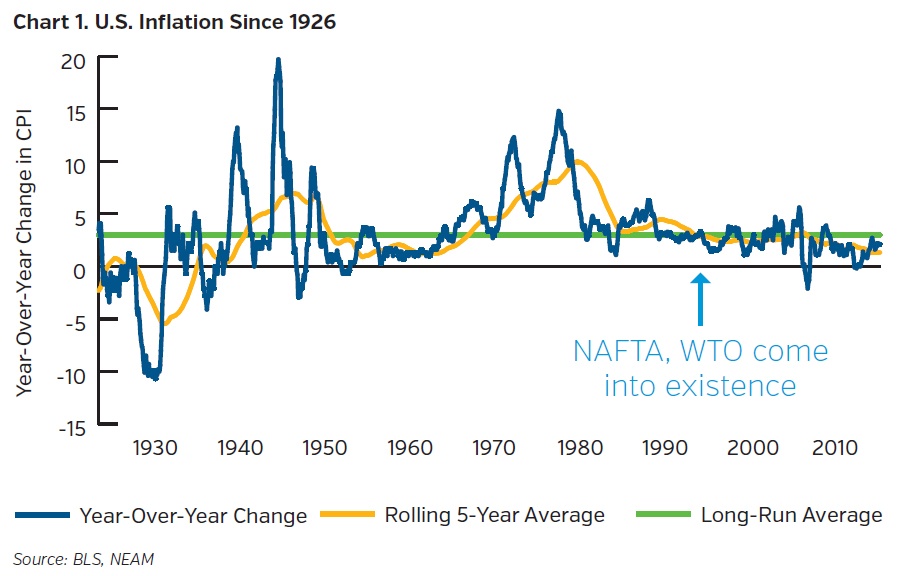 Unfortunately, however, this is not a one-sided coin. While the prices we pay for goods have remained in check relative to history, this was accomplished via a significant increase in imports. An unfortunate by-product of NAFTA and liberalization of trade agreements was (is) that the cost of goods made in the U.S.A. rose relative to imports. Hence, what was once a healthy trade balance in the U.S. turned into a significant and perennial trade deficit (see Chart 2). 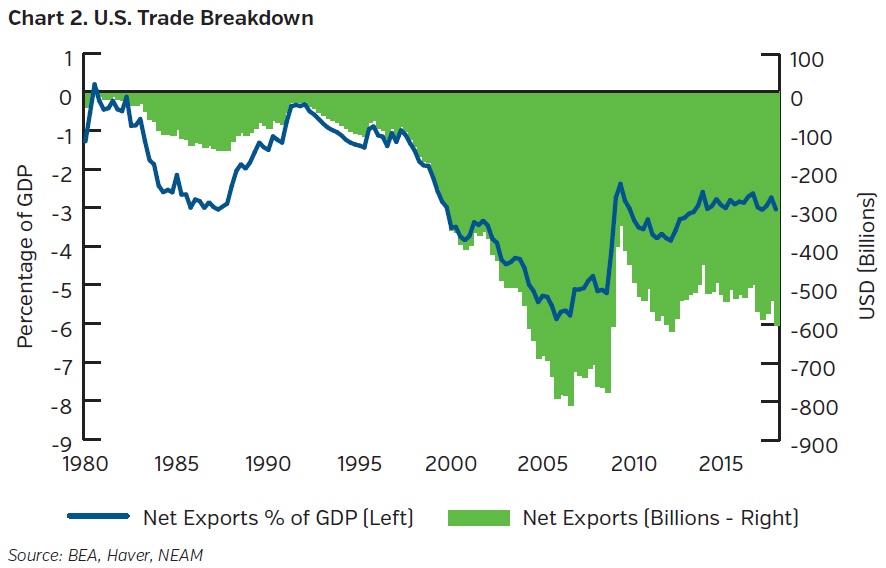 Whether NAFTA, the WTO and other efforts to boost free trade have been successful depends on one’s viewpoint. As U.S. consumers, the data suggests that, on balance, we’ve been winners via lower prices. This is an important point for an economy that is roughly 70% consumption based. From the vantage point of the U.S. worker though, and specifically those employed in manufacturing and production of industrial raw materials and components, the picture is far different. A spike in cheaper imports combined with the outsourcing and offshoring of operations by many U.S. companies has left us with a troublesome imbalance with regard to trade flows. It has also diminished the negotiating power of the U.S. worker when it comes to wages. Hence, wage growth has been subpar relative to history despite a labor market that, by many accounts, is quite tight.

Perennial trade deficits have drawn the attention and ire of many, including President Trump. Free trade deals, when combined with the previous tax code, created huge incentives for U.S. companies to engage in cross border arbitrage. These conditions diminished the presence and prominence of the U.S. in global manufacturing. Over time, we lost our comparative advantage and became a high cost producer, partly as a result of trade liberalization.

This is the crux of where we are today. The sabre rattling on tariffs and protectionism is hardly new. It is the logical reaction to a set of circumstances which, in the terms used by many economists, has “hollowed out” the middle class in the U.S. This was at least in part why Donald Trump was elected, and why this issue is of critical importance. A reversal of trade policy to an “America First” approach would raise prices both here and abroad as additional tariffs and levies would serve to reverse the trend of persistently low inflation. While a broad and prolonged trade war seems a fairly low probability outcome, we have to be prepared for the possibility.

In general, our view before the latest dust up on tariffs was that interest rates would move moderately higher over the course of the year. None of the banter (at least to this point) has changed our (positive) economic outlook or our outlook on rates for the short to intermediate-term. If anything, imposition of trade barriers provide another reason to be cautious on both price levels and interest rates. As to the question of whether low inflation is here to stay, our expectation is that inflation will move to more “normal” levels gradually, but sustained readings above the long-term average are very unlikely in the short to intermediate-term.