From Ubiquitous to Infamous: The Rise and Fall of LIBOR

Since the financial crisis, LIBOR has gone from scandal to reform and now is set to be phased out. What does this mean to the many markets that rely on this market standard as we transition to new benchmarks? 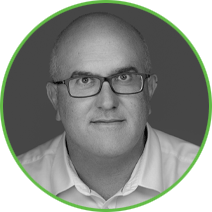 Show More
Paul is an Asset Class Specialist in the Structured Securities Group at NEAM, Inc. and is primarily responsible for trading and analysis of Agency Mortgage-Backed and Asset-Backed Securities. He joined the Firm in 2000, having previously spent three years at Frontier Insurance Group where he was responsible for managing a corporate bond portfolio and overseeing the Firm’s private equity limited partnership investments and trust activities. Paul received his Bachelor of Science in Business Administration with a concentration in Finance from the University of Vermont. He has been employed in the investment industry since 1998.

In late July the head of the U.K.'s Financial Conduct Authority (FCA) noted in a speech that, although there has been substantial improvement in the governance of LIBOR since the bid rigging scandal during the financial crisis of 2008–2009, the market for the underlying loans that are used in the construction of LIBOR is no longer sufficiently active. Hence, he proposed that LIBOR itself should be phased out. Market participants had already been working on a replacement for LIBOR, but this announcement was abrupt, leading investors to consider the ramifications for all asset classes that reference LIBOR as a benchmark.

The London Interbank Offered Rate (LIBOR) is the reference rate derived from 20 large international banks, indicating where they can borrow short-term wholesale funds from one another on an unsecured basis. The administration of LIBOR was overhauled in 2012 after becoming infamous during the financial crisis. This (somewhat arbitrary) benchmark has grown in importance over the years. According to estimates from the FSB (Financial Stability Board) the size of the U.S. Dollar LIBOR Market is $150 trillion – $160 trillion, but global tallies for LIBOR are closer to $220 trillion. At the onset of the financial crisis, the process by which LIBOR is set began to break down, as there was no functioning interbank lending (or borrowing). In the tumult, traders intentionally skewed their LIBOR rate submissions to the downside so as not to give the impression that their bank was at risk of failing. This had far reaching implications for financial markets worldwide.

In 2008, having become aware of the manipulation and distortion of LIBOR by banks and interbank brokers, the United States’ Commodity Futures Trading Commission (CFTC) and Department of Justice launched investigations into the practice. Their investigations and those of other international agencies led to criminal convictions and fines totaling billions of dollars.

Today, LIBOR as a benchmark rate has become harder to justify. Unsecured funding through interbank lending has dropped among banks as they prepare for Basel III implementation. Additionally, interbank lending never did recover to pre-financial crisis levels. Given the new level of scrutiny over providing quotes after the LIBOR rate scandal, reference banks have become reluctant to continue to submit quotes. In large part, this is due to the fact that for longer tenors, fewer data points exist to support a bank’s LIBOR rate (Chart 1). In addition, LIBOR levels spiked during the financial crisis as funding levels for overnight Treasury Repo displayed significantly more stability (Chart 2). 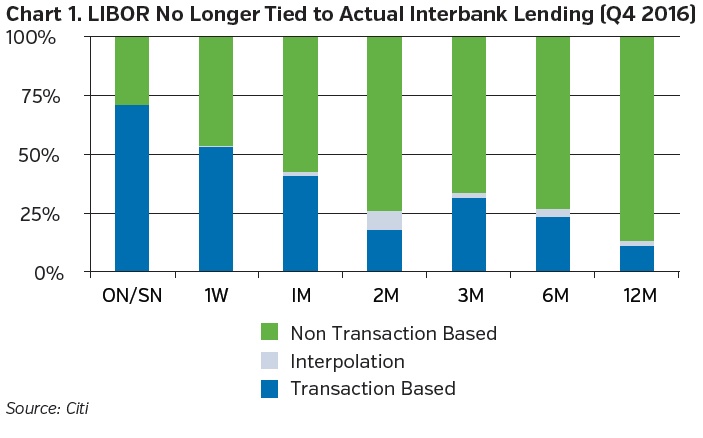 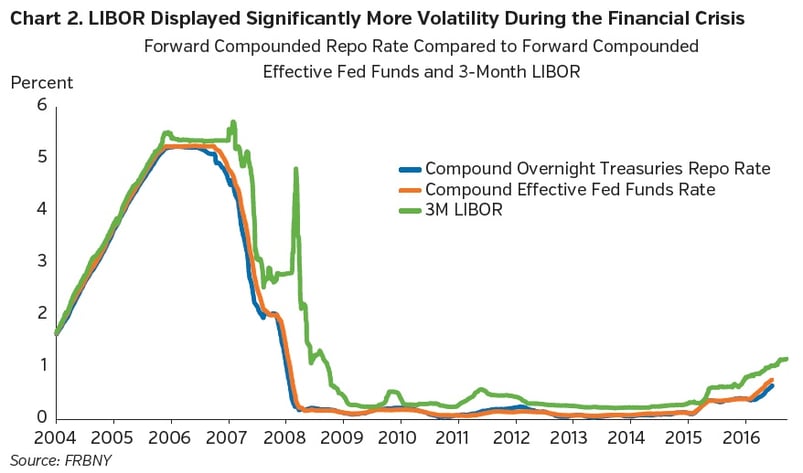 In 2014 the Federal Reserve assembled the Alternative Reference Rates Committee (ARRC), bringing together representatives from U.S. and international derivatives dealers, the CTFC (Commodities Futures Trading Commission), and the Federal Reserve, as well as an advisory group from buy-side firms. This group decided that the BTFR (Broad Treasury Financing Rate), a recently developed financing rate based on the cost of overnight loans that use U.S. government debt as collateral, would be an appropriate new benchmark to replace U.S. LIBOR.

Unlike LIBOR, the BTFR is backed by significant trading volume, with an average daily volume of $660 billion since 2014. Chart 3 shows the relatively close fit of BTFR to LIBOR. 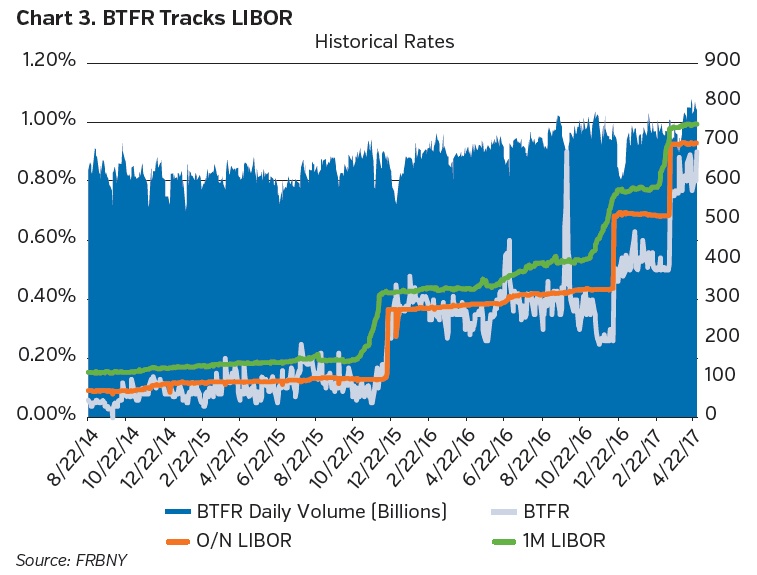 Given the sheer volume amount of outstanding securities that reference LIBOR, investors will need to ascertain what will happen to existing deals in 2021 when LIBOR reporting is slated to cease.

While it is too early to tell exactly what the transition away from LIBOR will look like, many constituencies will be affected. Borrowers whose interest rates are tied to LIBOR will (eventually) require a modification in loan terms. Investors in floating rate instruments will need to pour through prospectuses and offering documents to assess how interest rates will be set in the absence of a LIBOR rate. The provisions that govern in the event LIBOR is unavailable are anything but uniform. Indeed, some documents make no reference at all to this possibility. For many securities with shorter maturities or expected average lives, this will not be terribly relevant as they will mature before the proposed phase out of LIBOR. At a certain point though, new transactions will need to become more specific with how they will proceed without the rate that has been baked into millions of documents.

We expect, should LIBOR be eliminated without a broad solution that could somehow be applied across securities and contracts, that issuers might choose to present exchange offers to holders (perhaps into securities referencing a replacement benchmark rate) or simply call the securities rather than leave outstanding securities with vague terms or with terms that may not have been fully contemplated by some investors prior to purchase.

In sum, the eventual phase out of LIBOR will affect securities from vanilla asset-backed securities to esoteric derivatives and everything in between. We expect that a resolution on how the transition will occur will take several years and in the end will probably involve a great number of corporate actions where securities may be called, tendered for or simply replaced using the new index regime. The good news is that a replacement (or replacements) for LIBOR is/are readily available within the money markets and using the reference rate on repurchase agreements for general collateral should, in theory, be a reliable alternative—one where rates are observable and supported by significant transaction volume.