U.S. fiscal and monetary stimulus measures have been massive, leading many investors to wonder about the short and long run implications for the U.S.

Inflation: Stimulus vs. demographics and other factors

As we began 2020, the U.S. economy was on sound footing, albeit sporting an annual budget deficit of roughly $1 trillion. Now as we approach mid-year, the unemployment rate stands at ~15% and the deficit is set to explode to ~$4 trillion (and quite possibly higher) resulting from the massive economic rescue and support programs introduced to stem the economic dislocation caused by COVID-19.

Whereas past fiscal stimulus packages have focused on offense, i.e. boosting economic activity, the Coronavirus Aid, Relief and Economic Security Act (CARES Act) focused much more heavily on defense. The legislation included assistance for many sectors-both public and private-but its primary goals were keeping people in their homes, keeping businesses alive and saving as many jobs as possible (see Exhibit 1). In addition to the trillions spent on supporting individuals, small businesses and major corporations via the CARES Act, the Federal Reserve and the U.S. Treasury have committed up to several trillion more dollars to ensure that financial and credit markets continue functioning.

INFLATION: STIMULUS VS. DEMOGRAPHICS AND OTHER FACTORS

To say that the last few months have been stunning is stating the painfully obvious. The programs noted above are to be financed by the issuance of even more debt which will be purchased in large part by the Federal Reserve (and other central banks) who are price insensitive buyers, effectively creating money out of thin air. This scheme will ostensibly keep interest rates very low since the Federal Reserve is poised to buy as much debt as necessary to fund the rescue measures.

This begs the question of whether this can go on ad infinitum, or whether at some point, inflationary pressures make a comeback. This question has been pondered for over a decade now, as zero interest rates, negative interest rates and seemingly endless rounds of quantitative easing have ballooned central bank balance sheets to levels once unimaginable (see Chart 1). 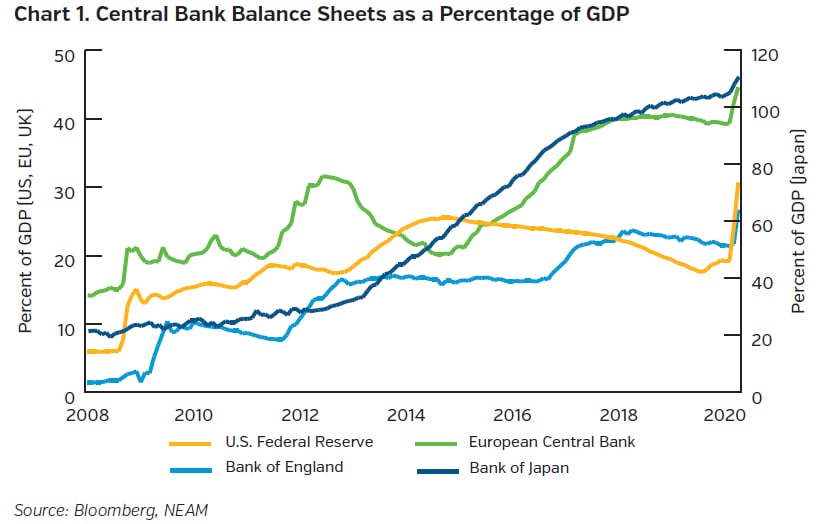 Yet despite the seemingly endless money printing which became the policy prescription of choice after the financial crisis in 2008-2009, inflation in the price of consumer goods and services has remained benign (see Chart 2). Indeed, monetary policies have had a much greater impact on financial asset prices than on prices for goods and services. To appreciate why, one needs to consider the following critical fact. Rising price levels for goods and services are ultimately a function of end demand which drives prices of raw materials, labor and services. The aging demographics prevalent across advanced economies, combined with efforts toward globalization over the last 25 years have been significant counterweights to price level increases and have mitigated the inflationary tendencies of ultra-easy monetary and fiscal policy. We have talked about these factors before. Demographics in developed economies puts a proverbial lid on end demand while globalization of supply chains has kept both materials and labor costs in check.

In addition, one area where price inflation has been significant for many years, higher education, has created a heavy debt load for younger consumers – consumers that in previous generations provided significant fuel for end demand. Ironically, government backed student loans provided rocket fuel for the spiraling cost of college tuitions which has now exacerbated the issue that the Fed is trying to combat.

Another more recently discussed item of note which has held inflation in check is income inequality. While income inequality is not usually discussed in the inflation context, it most certainly has played a role. With greater concentration of wealth in fewer hands comes a disinflationary impulse, since the marginal dollar is saved (or invested) versus consumed by those with the most wealth. Hence, while income and wealth disparity are discussed in terms of “equity” or what is fair vs. not, it can also be thought of in terms of suppressing end demand which ultimately is what pushes price levels higher. 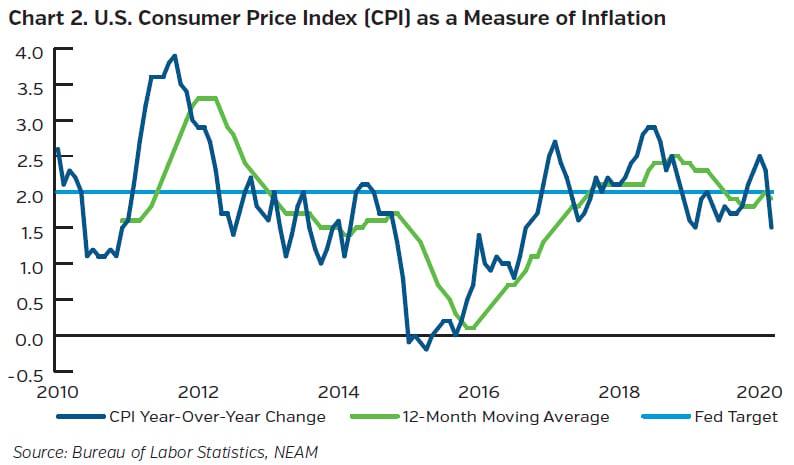 Hence, despite easy money policies which keep interest rates at astonishingly low levels, unless sustained end demand gathers momentum, it seems very likely we will continue to see more of the same – asset price inflation without a corresponding and sustained lift in general price levels. As we begin to emerge from the shut down period, it is entirely possible that we experience some temporary price increases as demand may temporarily outstrip supply in various areas. Oil and gasoline prices, for example, are likely to rise as we reopen economies globally. Oil production has declined by over 10 million barrels per day (for now), so we may now need to reestablish equilibrium due to supply side considerations. Time will tell, but if the Fed is to be successful in maintaining core consumer price inflation (and expectations) at or above 2% on a sustained basis, some combination of the previously discussed factors will need to change.

Looking ahead to the next three to five years, we will likely see a world where supply chains are less global with a greater focus on bringing manufacturing processes closer to home. Where the last 25 years focused on minimizing costs via globalization, the next several years will likely focus on national security and self-sufficiency, particularly in key areas of pharmaceuticals and medical supplies. Somewhat higher price levels will be accepted in exchange for security and national pride.

Another likely outcome of the pandemic is a reassessment of the distribution of profits between capital and labor. For purposes of this topic, we’ll consider the U.S. taxpayer on the labor side of the ledger. For decades, capital’s share of profits has increased as compensation for labor was held in check, as were consumer prices, by globalization and automation. There is (once again) an acute awareness that profits are distributed to shareholders while systematic downside risks are “nationalized.” One need only look at the recent language in the CARES Act which stipulates that companies that receive Federal aid will face restrictions from certain activities (dividends and stock repurchases) for a period of time in order to ensure that taxpayer dollars are not used to enhance executive compensation and shareholder wealth. This drumbeat seems likely to continue and become louder, given we currently have the highest rate of unemployment the U.S. has seen since the Great Depression. While wage inflation isn’t on anyone’s radar with the spike in unemployment rates, it does seem quite plausible that companies that employ financial leverage to enhance shareholder gains will, one way or another, be asked to shoulder more of the “insurance” costs going forward.

To that end, policy adjustments will be necessary to deal with the massive costs of this pandemic or the endless monetization of debt will likely (eventually) greatly debase the dollar and fiat money in general. In a post COVID-19 world, where government is called upon to be the lender of last resort and the guarantor of economic and financial stability, tax rates will likely rise to compensate for the fact that only governments have the wherewithal to deal with systemic shocks which, when they occur, entail enormous costs. Corporate tax rates should probably rise first and most, but individual tax rates will also likely rise. This seems likely to be a global phenomenon and we would expect this topic to find its way onto the agenda of future G-20 meetings. Insurance has a cost, and it will likely be paid for in the future by higher taxes at both the corporate and individual level.

We are maintaining our emphasis on fixed income spread products, as the rescue measures and Fed programs have supported credit markets. There is likely additional assistance coming for state and local government as well as they navigate the deferral of tax liabilities and the abrupt interruption of heretofore steady income streams. If the duration of the disruption is measured in months and not years, most states, local governments and agencies should be able to weather the storm of the century.