This Quick Takes outlines a brief history of the FHLB, our understanding of the NPR and how, if passed, the proposed changes may affect insurance companies going forward. 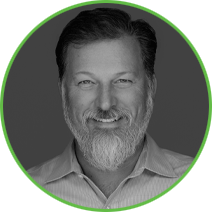 Show More
Coley is a Senior Research Analyst at NEAM, Inc. with responsibility for management and coordination of the Firm’s macro research efforts. He joined the Firm in 2007 having previously worked at M&G Investment Management in London and Fitch Ratings in both London and New York in various credit research capacities. Coley is a graduate of Brown University and a CFA Charterholder. He has been employed in the investment industry since 1997.

In September, the Federal Housing Finance Agency (FHFA) released a Notice of Proposed Rulemaking (NPR) proposing to revise its regulations governing Federal Home Loan Bank (FHLB) membership requirements while seeking to address what they view as issues related to the FHLBs’ housing finance mission.  This Quick Takes outlines a brief history of the FHLB, our understanding of the NPR and how, if passed, the proposed changes may affect insurance companies going forward.

Background and Overview of the FHLB

While the FHLB was initially designed to revive home construction and create a market for long term mortgages, the mission of the banks has evolved from the provision of funds for housing finance to include loans for small businesses and other local community development.

Over time, and today still, the FHLB’s ability to consistently fund at attractive rates provides for a steady stream of capital that can be made available to member institutions–big or small–who can then lend the funds out into their local communities at competitive levels, or use the funds for alternative purposes.

Currently regulated by the FHFA, the FHLBs are private and organized as cooperatives. Their members, which span many types of financial intermediary institutions, include insurance companies.

Summary of the NPR

Through the recent NPR, the FHFA is signaling its desire to strengthen the connection between FHLB membership and the support of housing finance. The FHFA intends to do this by revising membership eligibility. At their core, the proposals in the NPR appear to be aimed at curbing the provision of advances to institutions that ultimately use the funds in a manner inconsistent with the FHLB’s mission of promoting housing finance.

This NPR addresses similar issues that were brought to light by the FHFA with the original advance NPR that was proposed on December 27, 2010. Most members and FHLB branches alike disagreed with that proposal which ultimately never came to fruition. The FHFA‘s most relevant proposed changes for insurance companies are outlined below:

With respect to the insurance industry, the proposals that appear to be the most pertinent are those that deal with a minimum holding of HML and the definition of “insurance company.”

As regards to the minimum amount of HML, the proposal would employ an ongoing quantitative test requiring all members to hold at least 1% (and possibly more) of their assets in HML. The FHFA is also proposing to expand the list of assets that qualify as HML to include all types of mortgage-backed securities (MBS) that are fully backed by first mortgage loans on single- or multi-family property or by other securities that are fully backed by such loans. Under the existing regulation, only pass-through securities representing an undivided ownership in qualifying loans or securities may be counted as HML. Additionally, members need only to demonstrate that they have a requisite amount of HML on their balance sheet when they become members, with no quantitative level persisting once membership is attained.

The FHFA undertook a study to determine the impact of the minimum HML holdings proposal. The following chart shows how many institutions who are currently members would be considered Non-Compliant based on the minimum HML requirement proposed in the NPR. The FHFA provided this information using the annual statement data for 253 of the 284 insurance companies that were Bank members as of December 31, 2013, adding that 14 of the 29 insurance company members, for which no data was available, are captives. All three scenarios (1%, 2% and 5%) reflect the FHFA proposed expanded definition of “home mortgage loan.” The FHFA also stated, though did not quantify, that if the existing definition is retained (i.e., if only pass-through securities are counted instead of all types of MBS backed by qualifying loans), the percentage of insurance company members that would then appear to be out of compliance would be higher.

For insurance companies – Assuming approximately 50% of NAIC data for loans secured by mortgages on 1-4 family or multifamily properties are 1st lien, and therefore qualify as “home mortgage loans,” then non-compliance would be lower, according to FHFA study. 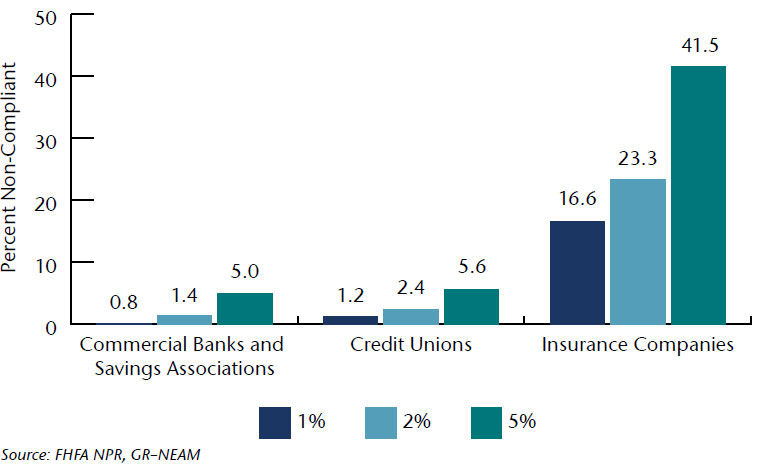 The NPR requests FHLBs and current members alike to provide their comments on all aspects of the proposed rule for them to take into consideration before issuing a final rule. However, the FHFA may not need consensus to move forward with the changes. The comment period for the current proposals has already been extended 60 days, bringing the total review period to 120 days, ending in January 2015. Similar to the reaction of the original ANPR issued in 2010, it appears most FHLBs and their members are in opposition to the FHFA proposed rule.

Key themes of those opposed include:

At this time it is unclear what the outcome of the NPR will be. The FHLB system has been in place for decades and continues to provide competitive financing to its members. The NPR, while creating a more structured framework for membership eligibility, will not alter this mandate. As mentioned, the comment period extends into the new year, and similar proposals were previously met with resistance and ultimately not put into place. However, if adopted, the rules could result in potentially fewer of the current members being eligible going forward. Additionally, the rules could slightly alter mortgage related asset balances on the balance sheet of existing members who may not currently meet the proposals as designed but elect to do so to retain their membership.

[1]  As stated in the NPR, “The statute defines ‘home mortgage loan’ to mean a first mortgage, or its equivalent, upon real estate on which one or more homes or dwelling units are located.  The regulation supplements the statutory definition of ‘home mortgage loan’ by defining the term generally to include any loan or interest in a loan that is secured by a first lien mortgage or any mortgage pass-through security that represents an undivided ownership interest in such loans or in another security that represents an undivided ownership interest in such loans.”  Furthermore, the proposed legislation is “intended to bring within the definition of home mortgage loan all types of MBS – including pass-throughs, CMOs, REMICs, and principal and interest only strips - that are fully backed by such loans.  The revised definition is not intended to include a bond or other debt security that is a general obligation of the issuer, even if it is collateralized by qualifying mortgage loans.” – FHFA NPR

[2] Study involved 2013 NAIC annual statements of 253 insurance company members.  Adj. Ins Cos involves taking half of the whole loan amounts in their filings and assigning them senior status (filings do not offer this level of detail) so as to qualify for the HML 1% rule.  These loans are all excluded for the “Insurance Cos” section above.