With the presidential election now only weeks away, we’re preparing for what may prove to be a turbulent period in financial markets. What do insurers need to know?

A Few Observations as we Head to the Polls

So what's an investor to do?

A Few Observations as We Head to the Polls

Elections seem to have gotten more difficult to predict with any true conviction and there is reason to believe that the 2020 presidential election will be a contentious, drawn out affair. In fact, it is widely speculated that it may be a repeat of Bush vs. Gore in 2000, only much, much nastier. The average of national polls has Biden ahead by 8+ percentage points, a gap which narrowed a bit over the summer months. Interestingly, betting odds, which have favored Biden to varying degrees since June, turned significantly in his favor after the first presidential debate (See Charts 1 and 2). 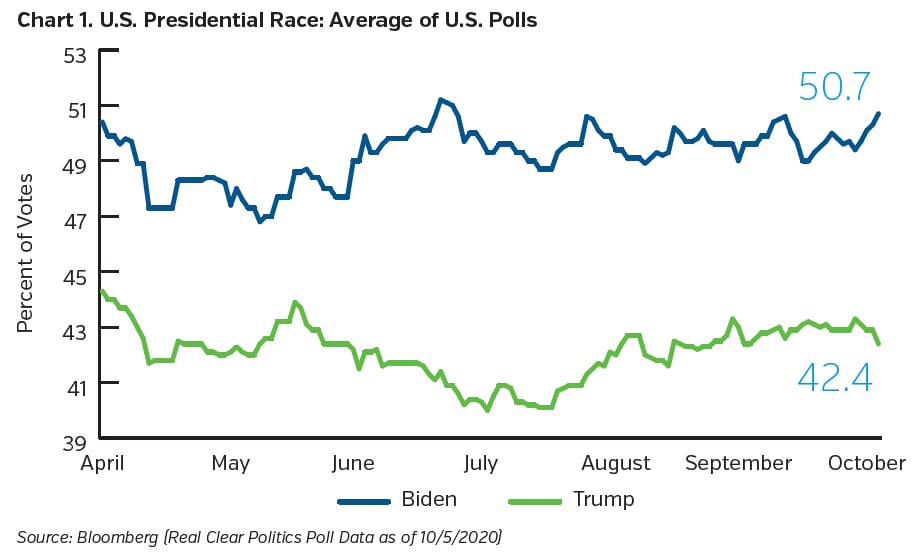 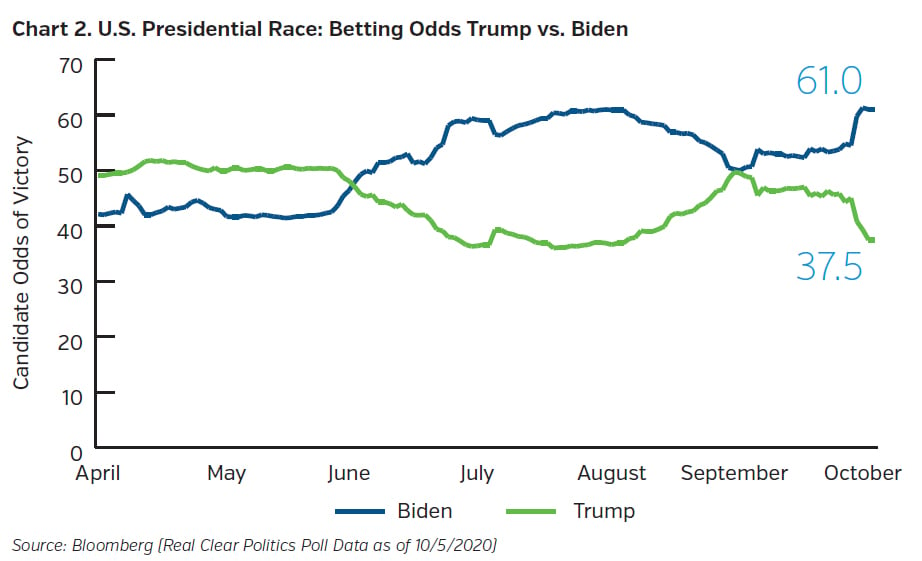 It seems possible, given the number of mail-in ballots that we’re likely to see in the wake of COVID-19, that the outcome will takes weeks to sort out with rancor in Washington and elsewhere already at a fever pitch. Yet if markets dislike uncertainty, as the old saw goes, one wouldn’t know it by looking at the current landscape. Equity and credit markets, except for a spate of volatility every so often, have continued to grind higher from their March lows.

In some ways, this election is quite similar to others with the GOP and Democrats opposing one another on the typical social, political and economic topics. The status quo would see Trump winning re-election, Congress remaining divided and more or less a continuation of the policies we’ve seen during Trump’s first term. A Biden victory with a Democratic take-over of the Senate would, without question, present the most risk for the markets as whenever one party has control of both the executive and legislative branch, that party is emboldened to further their agenda come hell or high water. This wouldn’t be terribly unsettling if the major political parties behaved like those of Reagan and Clinton, but they no longer do. The “winner take all” mentality in American politics at the moment resembles a scorched earth approach with both sides having honed their skills over the last 10 years.

With regard to economics and the markets, sectors including defense and energy would get favorable treatment from Republican politicians as they typically would, whereas companies participating in “green” initiatives such as renewable energy, electric vehicles, etc. would fare better under the Democrats. “Big Tech” has turned into “Enormous Tech” and it’s unclear whether either side truly has an interest in protecting citizens’ interests but both sides should. Private enterprises operating in sectors typically reserved for the non-profit arena–like universities and jails–are a particular bone of contention for Democrats and would face extremely strong headwinds in a Democratic sweep. Ironically, one sector that appears to be on the radar for both parties is the pharmaceutical sector – ironic because at the moment, the largest of these companies are scrambling to create safe, effective vaccines to keep COVID-19 in check, an accomplishment which would boost both the U.S. and global economies. Nonetheless, healthcare–and pharma in particular–seem destined to feel political pressure to lower prices, regardless of who wins the election. That assumption, however, appears to already be largely discounted as valuations for those companies have remained stagnant despite significant multiple expansions in the broad market and in the technology sector in particular. 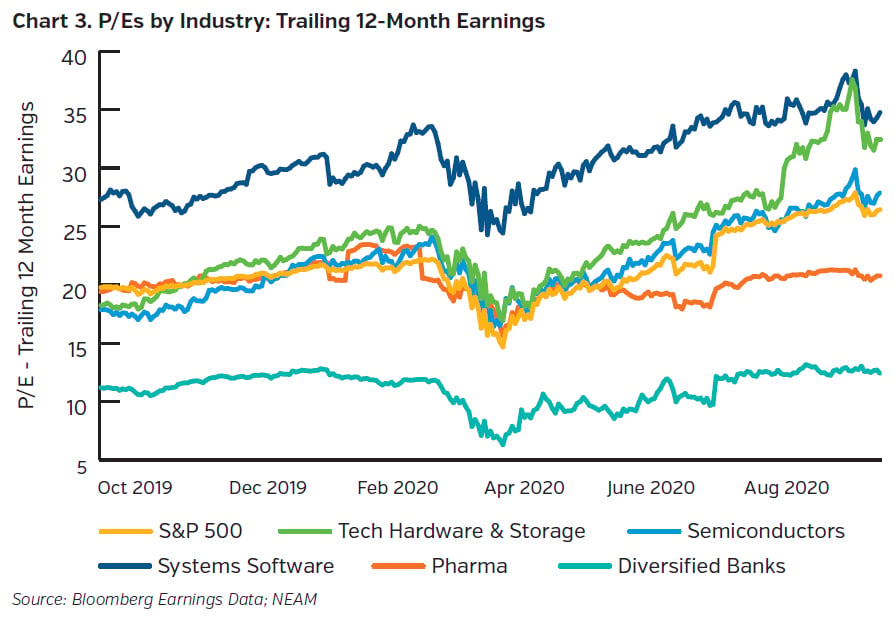 Another point both sides can evidently agree on is that, in the words of Treasury Secretary Mnuchin and Fed Chair Jay Powell, this is no time to be worried about budget deficits (paraphrased). While that is certainly reasonable given our current circumstances, a sensible person would then have to ask when IS the appropriate time to worry about massive deficit spending? If we don’t worry about it when times are tough and we don’t worry about it when times are good, then when might it be appropriate to address the issue? The answer of course is “not until we absolutely have to.” For now, with unemployment in the high single digits and the economy trying to recover from COVID-related shutdowns, both sides agree that the monetary and fiscal taps should be open. Here in the U.S., the COVID-19 relief plans are being financed entirely with debt. Once we put the economic damage from the pandemic behind us, however, we should prepare ourselves for higher taxes - primarily at the corporate level but also for those individuals with the highest incomes. This will likely be true both here and abroad as the costs of the pandemic have left no countries unscathed.

So What's an Investor to Do?

The polls currently suggest that Biden will win the presidency. Interestingly, the seemingly incessant tweeting from President Trump seems to have abated as he may be attempting to remain on his best behavior to make hay with the “undecideds” in swing states.

In any case, regardless of who wins, one thing is certain. The Federal Reserve will remain accommodative no matter which party next occupies the White House or controls Congress. The Fed has been (more or less) true to its word, refraining from trampling through credit markets “like an elephant.” Make no mistake however, that if a contested election unsettles the markets come November, the Fed will once again ramp up the countermeasures which are now firmly in place and offer plenty of firepower to combat a credit malaise. Whether the Fed should or should not intervene to influence markets is now yesterday’s question. They have and they will. The only question is that of the “strike price” on the Fed put. It seems to be getting closer and closer to “at the money,” and while there will certainly be rotation among sectors once the election results are known, equity and credit markets will continue to be supported by the Fed even as the political arrows pick up pace around the election.