An "Easy to Win" Trade War Would be Over by Now

Trade tensions between the U.S. and China continue to escalate. What do insurers need to know and what does it mean for investors in USD?

Locking Horns with the Red Dragon

SOme Progress on Trade has Certainly Been Made

The capital markets have exhibited flashing yellow lights for quite some time. From the incredibly sanguine view on volatility seen through 2017 and most of 2018, to the “can’t lose” attitude of investing in today’s high flying momentum stocks, to the advent of “crypto” and the (much) looser investor protections contained in bond and loan indentures, investor behavior and attitudes have been characteristic of those exhibited late in an economic cycle.

Until recently, investors had seemingly concluded that the U.S. was an island–an entity which could defy gravity as the global economy began to slow and trade tariffs (particularly with China) began to bite. The evidence from earnings reports and various recent economic data suggests that investor sentiment may be changing. To be very clear, earnings reports from companies have been, on balance, very strong. However, during third quarter 2018 earnings calls, companies have underscored the impact of tariffs on input costs, and conveyed a somewhat softer view of top line growth. The correction in stock prices which occurred in October was at least in part the result of softer guidance and a cacophony of companies citing price pressures caused by tariffs.

Locking Horns with the Red Dragon

The battle of wills that President Trump has undertaken with China is one that, at some point, needed to be fought. China’s business practices have long been a complaint of both sovereigns and private enterprise, Republicans and Democrats alike. China’s hardball tactics have not been limited to trade, however. They’ve made their presence felt on the geopolitical stage by taking a very aggressive stance on territorial claims in the South China Sea, an area which is rich in oil, gas and fisheries. The waterway is also a conduit for roughly 30% of global shipping which underscores its strategic importance. During the last five years, China has spent extraordinary sums to develop seven military bases in the South China Sea in an effort to exert greater influence and to challenge the economic and territorial claims of its neighbors. Hence the “war” being fought with China is not limited to trade but includes efforts to maintain the balance of power in the Far East as well.

Returning to the topic of trade, China’s huge population and its nascent middle class were all the incentive required to get U.S. (and other international) companies to play ball, accepting China’s terms in order to gain market access. The U.S. has begun to push back hard and using stock indices as a yardstick, the capital markets seem to have concluded that the U.S. is “winning” (see Chart 1). As the world’s largest economy, driven by ~70% consumption, the U.S. is by far China’s biggest customer and as such, we do have significant negotiating leverage. If the battle continues to escalate though, and goes on indefinitely, it will take a bite out of consumption as U.S. consumers will ultimately pay higher prices for all kinds of goods. Additionally, companies will (and indeed are) feeling margin pressures from higher input costs. That, in effect, will be the collateral damage from this war as far as the U.S. is concerned. 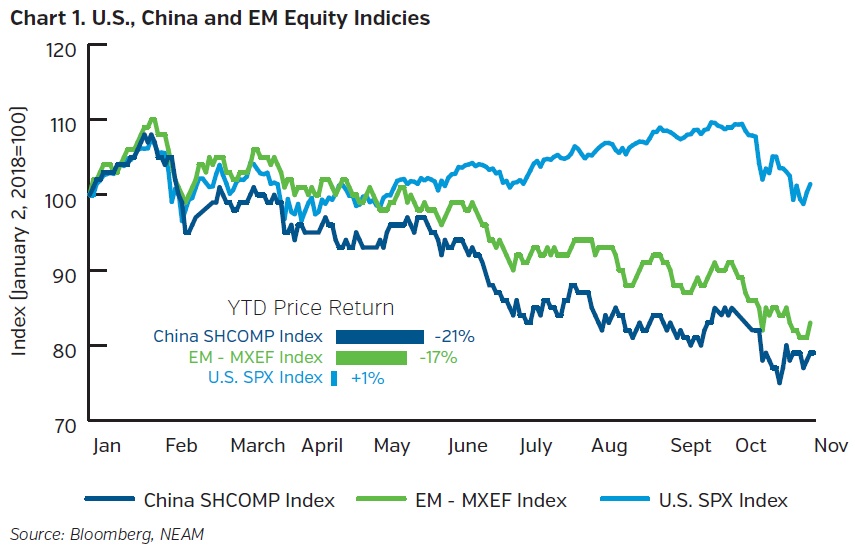 There’s no question that the tariffs have had an impact on the Chinese economy, as the government has once again stepped in to offset somewhat slower pace of economic activity. In this regard, the tariffs are having their intended effect. Several companies with operations across the Far East are looking for alternatives to producing goods in China in order to avoid U.S. import duties. Vietnam and Indonesia seem to be likely beneficiaries, as companies attempt to reconfigure their supply chains to engineer China out of the equation where possible. 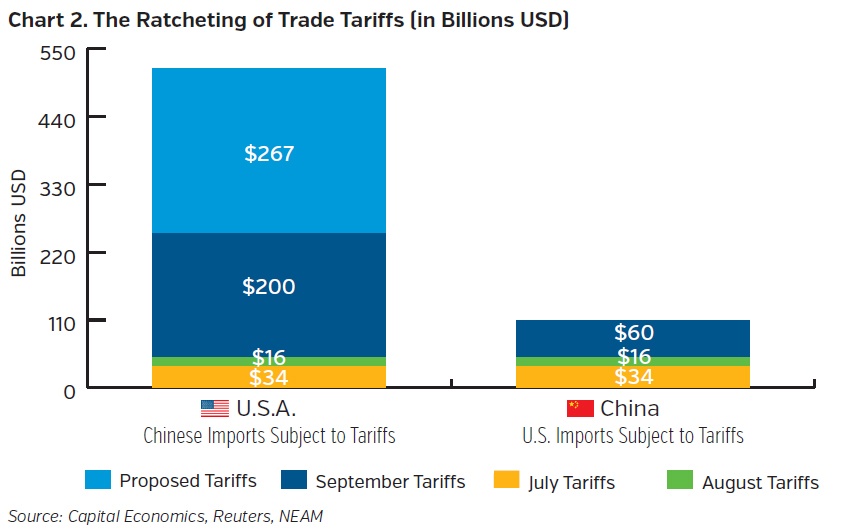 Of course in a world that has become extremely interconnected over the last 40 years, nothing is “simple.” There are lots of opportunities to create unintended consequences, especially because the U.S. tariffs thus far have focused on materials and intermediate goods. This is no doubt politically motivated, because it would have been much simpler (and at least as logical) to impose a tariff on all Chinese goods. Instead, the Administration’s hope is that by ratcheting up pressure in a stepwise fashion, the war will be won before the U.S. consumer feels too much of an impact (see Chart 2).

The jury is out as to whether this tactic will work. With so much at stake, including national pride, the Chinese will fight the war on as many fronts as possible which brings us to our next point.

The Chinese yuan has depreciated roughly 6% so far this year (as have many other currencies) and is getting closer to the “magic number” of 7 (that is, ¥7 to the dollar) (see Chart 3). The Chinese have been belittled, berated and painted into a corner (or at least one quadrant of the room), so the temptation must necessarily be getting stronger to allow the yuan to weaken further. If the yuan devalues to ¥8/USD–a further devaluation of 14%–then that plus the previous weakening would offset the effects from U.S. import tariffs. At the recently concluded G-20 meeting in Argentina, it was resolved that the U.S. and China would observe a 90 day “truce” with regard to further trade actions so that the two sides could work out a long-term solution. That said, if the tariffs on the $200 billion above ultimately escalate to 25% and we also assume that a tariff of 10% is imposed on the remaining (more economically sensitive) $267 billion of Chinese imports, then the approximate increase in the cost of those imports would be roughly $89 billion, or a weighted average tariff rate of ~17.3% (see Table 1). Hence, devaluing the yuan to something closer to ¥8 per dollar, when combined with year-to-date depreciation, would offset the dollar impact of U.S. tariffs in its entirety.

While that may work for China in the short run, it would infuriate the Administration and result in significant escalation in tensions. Additionally, such action would simultaneously strengthen the dollar not only against the yuan but against most if not all EM currencies. We all know how much fun the market volatility that ensues from this fact pattern can be. 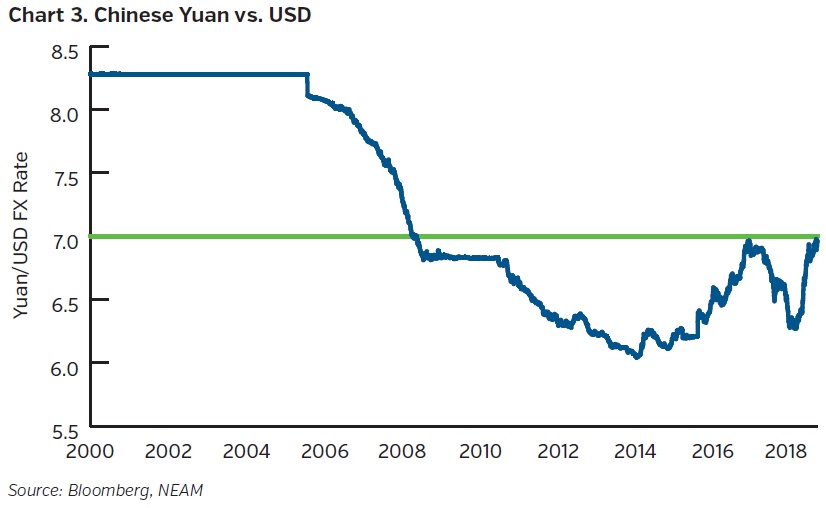 Some Progress on Trade has Certainly Been Made

On a somewhat lighter note, our travails with other trading partners really could be termed a “skirmish.” NAFTA may be replaced by NAFTA2 or the “Unites States Mexico Canada Agreement” (or USMCA) but the proposed changes are not huge. The U.S. got a little and gave a little, a pretty good indication that NAFTA was relatively “fair” to begin with if free trade was in fact the goal. The sabre rattling over autos with the European Union will likely find an adequate resolution with more balanced tariffs between the U.S. and the European bloc. Some agreements (in principal) have already taken place with the EU pledging to buy more U.S. soybeans, liquefied natural gas and a number of other items.

The situation with China is different and can, in our opinion, be accurately described as a war. China imposes more tariffs than our advanced-economy trading partners and requires a much higher “ante” for playing in its market. This is a battle that needed to be fought sooner or later so we should give some credit to the Administration for having the courage to fight it. That said, the “rules of engagement” are quite different this time.